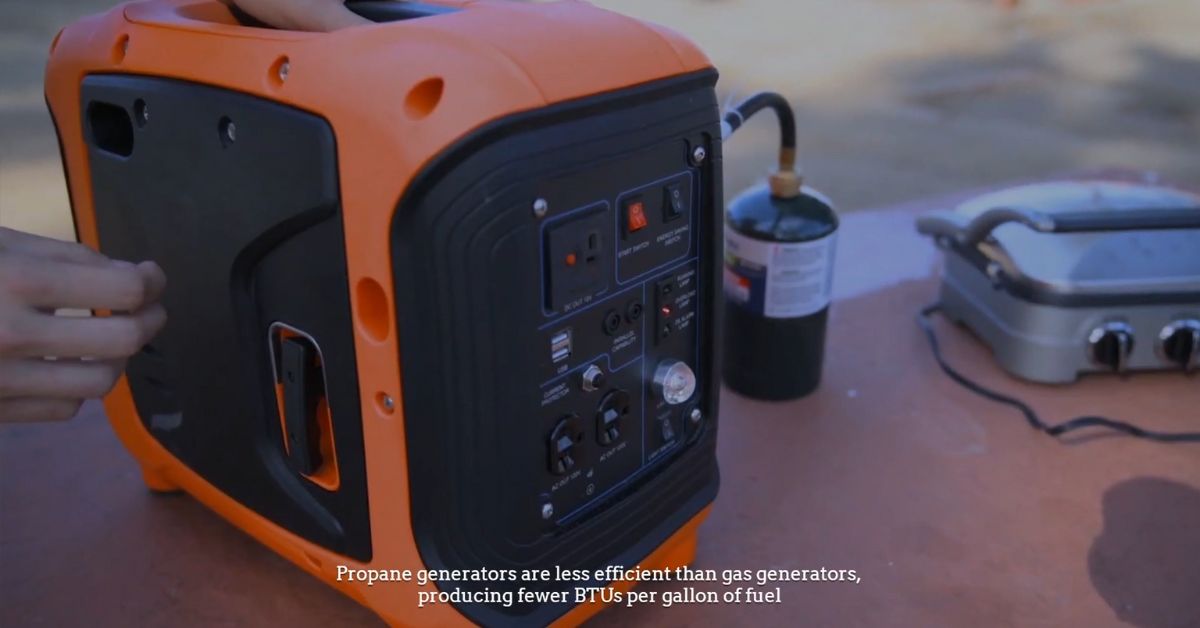 During a power outage, a portable generator is a very useful device that acts as an immediate electrical backup source. It is thought to be the most cost-effective and reliable energy backup source for blackouts lasting hours to days. When used for domestic purposes, it drives essential appliances such as refrigerators, water pumps, and water heaters.

Generators are used in industries as a source of electrical backup to keep operations going. Similarly, contractors use generators to fuel their work tools at building sites that aren’t connected to the main power grid. Campers use small generators to fuel the equipment they use inside their camps and when hiking.

If you use a portable generator outside the building, take a look at our range of generator covers.

We’ll compare propane and gas generators, as well as their benefits and drawbacks, in this article. This article will assist you with a propane vs gas generator in making the best generator purchase decision possible.

A controversy about propane and gas generators has recently erupted.Which one is better, which one is easier to use, which one is more effective, and which one can you save money on? Your final decision is yours to make, but you must be fully informed. Please keep in mind that, apart from the fuel type, the generator’s operation is the same.

Propane generators have recently become the talk of the town. Propane has long been used to barbecue steaks and hamburgers, but it is now often used to power generators. Propane is stored in bottles, and spillage is extremely rare. And if it falls, it vanishes quickly and does not pose a significant threat.

Propane burns cleaner than gas and is also safer for the atmosphere, so by using a propane generator, you are contributing to environmental protection. Propane is also less expensive than gasoline, and propane-powered engines are quieter to operate. You can also have peace of mind if you use propane generators.

One of the most significant advantages of using propane generators is their accessibility. As opposed to petrol, propane does not need electricity to fill a tank. As a result, you can relax about the source of fuel for your generator during long power outages, hurricanes, and natural disasters.

You won’t have to wait in long lines to have your tanks filled with propane. Propane has an unlimited shelf life; you should be more concerned with the container in which it is stored than about propane itself. As a result, if you have any extra propane, you can use it without fear.

Propane is used straight from the storage vessel, and you don’t have to pump it into your generator’s fuel tank, making it safer and less inconvenient to use. Propane tanks, on the other hand, are larger than gas tanks.

One of propane’s drawbacks as a fuel is that it cannot be used below 20 degrees Fahrenheit. Propane is also significantly less effective as a fuel than petrol. Propane fuel systems are also more difficult to install than gasoline fuel systems. In the event of a malfunction, repairs are normally more expensive and take longer than with a gas generator.

Generators of this kind are the most common.The popularity of gas-powered generators stems from the fact that they are readily available on regular days from dozens of gas stations in your city. Gas supply is simple and guaranteed by authorities unless there is a real emergency in your region.

One disadvantage of using gas generators is the high cost of fuel. Gas prices are steadily rising, and these rising costs will have an effect on your overall budget. Furthermore, during times of emergency, fuel prices skyrocket.

The use of gasoline is hazardous. It is very flammable and does not readily evaporate. It’s also poisonous and pollutes the atmosphere when it’s burned.

Gasoline is expensive to store and only has a 12-month shelf life. Gasoline starts to go bad after 12 months, so if you’re keeping it, you’ll either have to use it within 12 months or waste it after that.

Gas must be moved from the storage tank to the generator’s fuel tank. The fumes are extremely poisonous and can cause lung harm if inhaled for an extended period of time.When working with fuel, we suggest that you wear a face mask.Note that during long outages, you’ll have to refill your tank several times during the day.

Gas generators are not a good idea if the sole intention of getting a generator is to use it during an emergency or natural disaster. The majority of emergencies are marked by an electrical blackout, which means you won’t be able to get gas from a nearby station and will be without power. Most people keep fuel in their attics or garages, which is a dangerous practice.

We’ve now presented you with all of the positive and negative aspects of both generators. It’s all up to you. Getting a dual-powered generator is a better way to deal with this problem. It also deals with gasoline and propane. On regular days, you can use fuel, and in a disaster, you can use propane.